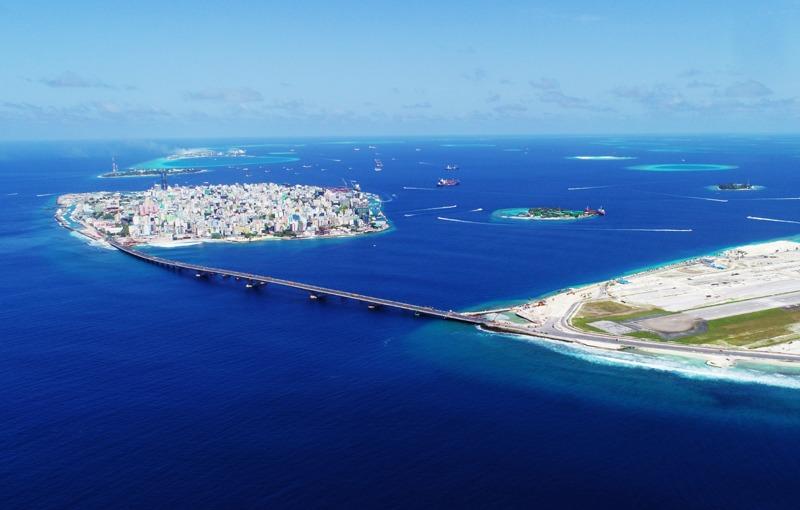 This aerial view shows the China-Maldives Friendship Bridge, which joins the capital city of Male with the airport island, on Aug 24, 2018. (PHOTO COURTESY OF XU FUDI)

A life-changing cross-sea bridge built with Chinese aid goes into the history of island nation Maldives on Thursday as a “gateway to tomorrow” in the eyes of the nation’s leader.

“Today, the impossible is possible,” said President Abdulla Yameen Abdul Gayyoom while addressing an opening ceremony in its capital Male before leading vehicles through the China-Maldives Friendship Bridge linking its two most important islands. Dazzling light beams and festive fireworks shooting up from the bridge sent thousands of local people and tourists to cheers and excitement at shoreside, embankments, view platforms, and roofs in Male. People thronged the white-sand beach watching the lighted bridge deep into the night.

The bridge is a dream come true for former Minister of Construction of the Maldives, Umar Zahir, whose generation went through rejections by builders who found a bridge impossible to construct before the Chinese success. This Aug 30, 2018 photo shows the fireworks display at the opening ceremony of the China-Maldives Friendship Bridge, in Male, capital of Maldives. (PHOTO COURTESY OF XU FUDI)

President Yameen also outlined how he and Chinese President Xi Jinping reached an agreement on the project during Xi’s visit here in September 2014. Amid the fireworks displays were “Thank You” words to both presidents. This Aug 30, 2018 photo shows the fireworks display above the main gate of the China-Maldives Friendship Bridge, in Male, capital of Maldives. (PHOTO COURTESY OF WANG CHAO)